Affordable housing: for whom?

Affordable housing is not a bar of soap. The housing needs of a single person differ greatly over the course of their lifetime. For that reason, the first important question is affordable housing for whom?

The analysis of housing needs following a life cycle approach divides households based on dominant phases (students, young professionals – both singles and couples, young and growing families, established families, empty nesters and the elderly). These groups differ from one another in their needs and additionally have high internal variation in terms of their financial capacity. The affordability crisis affects those with low financial capacity and whose spatial needs are increasing disproportionately. Of particular concern are young and growing families, especially those in which one or both parents have average or low earnings at the same time as the spatial requirements are increasing. Families in which one or both parents are relatively young and in the initial stages of their career development are particularly affected. Pensioners also represent a group with changing spatial needs and limited financial flexibility. Ageing populations in Europe will need age-appropriate housing with high accessibility standards that don’t present an inordinate drain on limited resources such as pensions and private savings.

In addition, these groups often compete for the same housing stock. Students and young professionals may go in on a flat share with three incomes and be able to outbid a young family for a larger apartment. Flat shares are often less expensive, less risky, and easier to obtain than individual apartments, in particular for those single households who are just entering the housing market. Not all housing is age-appropriate for seniors and those with mobility issues, another issue which will become increasingly important in the coming years.

Affordable housing: by whom?

The second critical question is one of provision – affordable housing by whom? Housing provision is often framed in the false dichotomy of market vs. state. In these debates, housing is presented as either a market commodity which is regulated in a variety of ways depending on the national, municipal and/or local context or it is state-provided. Notwithstanding the fact that this typology is not complete, both of these types of housing provision present a range of challenges.

Free market housing provision treats housing stock as a commodity, and the increasing financialization of housing markets frames these commodities in terms of quarterly returns and profit maximization. In particular, the internationalization of holdings in housing markets presents a grave problem in the regulation of prices. It also bears mentioning that the sale of city-owned properties to the highest bidder compounds the problem of affordability in new construction projects by creating high initial costs for investors.

Many affordability activists argue (and rightly so) that housing is a basic need and, as an immovable good, should be regulated differently from other types of goods. Following basic capitalist logic, if inner-cities are becoming more expensive, then this will certainly function as a social sorting mechanism, driving less financially strong actors outwards – indeed, this sociospatial segregation is a concomitant of rising rent prices in many cities today.

In American and western European post-war urban models, those who could not afford housing on the open market would receive allocated units in municipally-owned housing (typically in large-scale estates). Again, we see the sorting mechanism of the market at work: over the 1970s and 80s, these housing estates frequently became hotbeds of social disenfranchisement and a range of self-reinforcing social and economic problems, doubly strengthened by their spatial concentration.

In addition to these socioeconomic issues, municipal housing provision is costly to build and manage. Entrepreneurial city strategies have sought to outsource or reduce administrative burdens, in this case through privatizing once municipal housing stock. This step often loosens rent and occupancy controls as cities attempt to fill gaps in their municipal budgets. In light of these major drawbacks, it is understandable that many cities are deeply wary of municipally-owned housing provision.

Commons-based housing provision provides a perspective for housing beyond state and market, in which users have a much larger degree of control over amenities, quality and price.

Commons-based housing provision in the form of cooperatives present a way for renters and owners to share costs and remove housing stock from profit speculation. It also represents a potential windfall for cities. In the Zurich cooperative model, for example, long-term leases of municipally-owned land actually provide more capital to municipal budgets over time than an outright sale, all while the property remains in the control of the municipality. Newly constructed housing on this land can be adjusted in distribution and quality to meet the needs and financial capacities of the users. However, it should be noted that commons-based housing provision can only meet the needs of those who have the time, energy and other resources to invest and will not meet the needs of all of the groups mentioned in the previous section. However, commons-based housing presents a good solution for established households currently being priced out of the standard housing market.

Affordable housing: where and how?

So what kind of affordable housing are we talking about? Renters or owners? Central or suburbs? New construction or existing stock?

In order to protect existing affordable housing stock, market regulations need to be equipped with appropriate sanctions. Centrally-located affordable housing stock is a valuable and rapidly disappearing resource. While it is critical to respect the interests of landlords, it is important to create disincentives for predatory and speculative practices.

If central, city-owned parcels are available, new affordable housing and an increase in market diversity can be created simultaneously through commons-based housing, as described above.

Many cities lack these parcels, however and are reduced to the creation of new housing through metropolitan expansion. Here it’s critical to consider commute times and cluster housing around transport hubs if possible, creating a mix of professional developer and cooperative-developed housing.

In conclusion, market diversity with balanced consideration of user groups, provision and location represents one of the best options for making affordable housing a reality for a larger portion of the urban population. This includes a thorough analysis of life cycle-based urban development goals and the drafting of strategies to diversify housing provision in large metropolises. For example, university cities, cities which are ageing and cities which want to attract and keep young families would do well to create policies to encourage the provision of large (3+ bedroom) apartments which can be flexibly used by flat shares and families and small (1 bedroom and efficiency) apartments which fulfill high accessibility standards and can either be used by students or the elderly.

Cities need to find different ways of making their real estate assets generate municipal income – long term leases present one possibility for the realization of this goal. Content-based assessment of submitted approvals (instead of a highest-bidder process) could lead to an increase in affordable housing provision in city centers where new construction is concerned, including an increase in cooperatives.

In all cases, however, diversity in the housing market is key to maintaining vibrant city centers in which a wide range of residents can coexist.

Get The Urban Commons Cookbook! 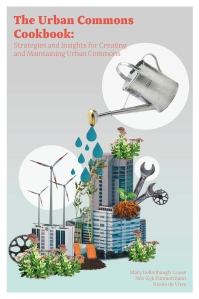