This is the second chapter in my three-part series about the development of Berlin’s housing market from the city’s division to today. To get some background for today’s episode, housing in the reunified city, you should check out episode one, housing in the divided city.

Hope you’re all ready for some complexity… This article is going to draw on a lot of the topics that I covered in my dissertation, so don’t be surprised if I quote myself.

(Just a quick disclaimer: I’m not going to touch on every single nuance. There are plenty of books and articles about specifics – I’ll be happy to make suggestions if there are questions. Today’s article is an attempt to give an overall picture of the situation.)

When we left Berlin, we had two cities separated by a wall which had wildly different development curves, housing stocks, and policy instruments. Reunification was a complicated and messy process in which legally the GDR acceded to (i.e. became part of) the FRG. The reunification contract provided for the restitution of property which had been seized by either the Nazis or the GDR, which brings us to our first issue:

Property restitution really threw a wrench into the gears of rapid inner-city development for a variety of reasons. Property claims could be asserted by any number of people, and it was not uncommon to have multiple claims for individual properties. This was not only the result of seizure of property from Jews by the National Socialists followed by a repeated seizure of that property by the GDR in order to make it into people’s property, in addition, many of the original owners were no longer alive, so claims were made by multiple possible heirs.

Consider, if you will, the complexity of a building once owned by a Jewish family which was seized by the National Socialists and given to a German family, and was then seized again to be made into common property. If some part of the Jewish family survived the Holocaust and, for example, emigrated to the United States, by the 1990s, there could have been a rather large number of potential heirs to the original family (plus the Germans whose property was seized by the GDR). How does one decide who is the “legitimate” owner?

Needless to say, property restitution slowed the process of inner-city development significantly, as property could not be developed until competing claims were resolved.

As a result, the German government passed the investment priority law (Investitionsvorrangsgesetz). As I stated in my dissertation:

Implemented in 1992, this law provided a solution for property questions created by restitution, and aided in the acceleration of economic growth and structural transition in the new German states, as set out in the unification contract. The investment priority law delivered a way around the bottleneck by allowing economic development of buildings and lots still pending restitution as long as the plans provided housing, jobs, and/or infrastructural development (Maurer, Sander, & Schmidt, 1991; von der Heyden, 1995); monetary remuneration was then provided to the owners once the legal details surrounding ownership had been cleared. This significantly expedited development, though many of the promised jobs never appeared or were lost in the 1993 global recession (Schulz, 2000).

Property restitution was however only one of the issues that contributed to the extremely dynamic changes in the Berlin housing market in the 1990s, as we will see.

Suburbanization and out-migration from the city in the 1990s

The reunification of Germany also had significant effects on the availability of housing options for both East and West Berliners. In particular, single-family homes became an option on a large scale for the first time, albeit for different reasons. West Berlin had been a city without suburbs – it was essentially surrounded by the GDR on all sides. Thus, there was no space to expand, and single-family homes, in particular new construction, were not a significant part of the housing market in West Berlin before 1989. In East Berlin, as I mentioned in the last episode of this series, state-controlled housing provision was concentrated on prefabricated, large-scale housing estates, which embodied the collectivism which was ideologically inherent to the GDR.

Thus, when the wall fell, land and choice became available to the residents of the now-reunited city. Many chose to realize their desire for a single-family home, as can be clearly seen in the migration statistics for Berlin and its surrounding state, Brandenburg, for the 1990s: 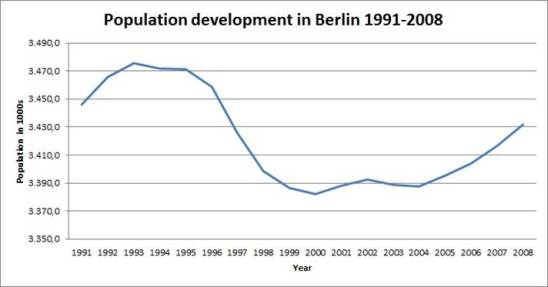 Looking at these images side by side, we see that the city’s population dropped significantly in the mid- to late 1990s (figure 1). Figure 2 shows us that this was due to migration out of the city. Finally, figure 3 shows us where many of these residents were going – outside the city limits in the surrounding state of Brandenburg, i.e. to the suburbs. The timing of the peak of out-migration about seven to eight years after reunification links up with typical lead times for new construction projects. In fact, many suburban communities around Berlin and other cities in the new German states were constructed in exactly this period.

At the same time, significant changes were also taking place in the inner city districts.

Over the course of the early and mid-1990s, a relatively large number of urban renovation areas (Sanierungsgebiete) were designated in the eastern half of the city. These areas were intended to address the extremely dilapidated state of the industrial-era housing stock in East Berlin through a federal subsidy for renovation. As I said in my dissertation:

The urban redevelopment areas in the eastern inner-city districts were structurally a great success. Industrial-era buildings in districts such as Prenzlauer Berg, Friedrichshain, and Mitte, a large percentage of which at the time of reunification had neither modern heating nor a bathroom in the apartment, were modernized (Düsterwald et al., 1994; Häußermann et al., 1999); the historic city structure and historical buildings were to a large extent preserved in these efforts. The social effects of urban redevelopment were less positive. The social intention of redevelopment was to preserve the heterogeneous resident structure, including as many original residents as possible. Indeed, in the majority of cases, the original residents did not return after renovation and modernization was complete (Bernt & Holm, 2002; Holm, 2006a, 2006b, 2010). The main effect of modernization and the widespread overturn of the resident base was therefore an extremely rapid gentrification which has quickly spread beyond the urban redevelopment areas themselves (Holm, 2011a).

One of the main reasons that the population turnover was so high is that the original residents were quite old in many cases – remember, young families preferentially received newly-constructed housing, which led to a concentration of political dissidents & the elderly in the unrenovated housing stock in the center of the city. Those who were relocated often stayed where they ended up.

The wholesale renovation of the dilapidated housing stock seriously shifted the contours of the housing market, which has had significant consequences in a city with perennially low wages:

The principal side effect of modernization, rising rental prices for renovated housing, combined with the welfare reforms of 2005 (Hartz-IV) have increased the speed of gentrification and sociospatial segregation, in particular through the displacement of low-earner and welfare-recipient households. In-migration since 2005 has compounded the problem by increasing demand and competition for an already scarce supply of rental objects (Holm, 2008). The increase in demand plus high dynamism in the rental market, above all in the inner city, have continuously driven the prices for new rental contracts to new highs (Holm, 2012). This has, in turn, led to the displacement of welfare-recipient households as rental prices rise above the mandated rental cost supplement (Holm, 2008, 2011b).

Which brings us to our next and final topic for today…

The renovation areas, the city’s increasing popularity, and an increase in population fluctuation worked together to begin the process of gentrification in the inner-city that continues today. High fluctuation reduces the dampening effect of rent control, since landlords can theoretically raise the rent each time a new contract is signed. An increase in new residents from outside, in particular those willing and able to pay more for the same properties and outbid local residents, is a major sore point for many Berliners, especially on the eastern side of the city.

The city has implemented a range of policy measures to ameliorate these effects, with mixed results. More about gentrification, the mechanisms behind it, and the growing homebuying sector in the next and final episode, “The fate of renting and owning, today and tomorrow.”